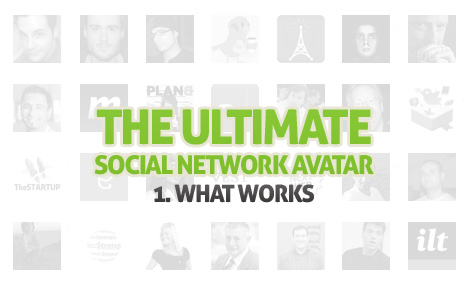 Avatars are the little images that represent you, your brand or your company on the web. While some take them for granted, they’re an integral part of social media branding. If you stand out, you get more eyeballs – it’s as simple as that. As you would wear a suit to a meeting, why not tidy up your avatar? Here are some things that work on Twitter, the hottest social network to hit the web:

The Shape Does Sell

Senko Rasic uses a PNG photo with a transparent background. Why does it work? Shape. This avatar stands out because of it’s shape (Senko’s head) and not the actual image. It stands out on Twitter on the white background as well as in Tweetdeck on the black background.

How to Use Contrast

Collis Ta’eed uses a bright yellow background which functions as a nice contrast to his face. Why does it work? Contrast. The photo first of all looks nice because of the rule of the third, but also because the bright orange background obviously stands out among all the mixed or plain backgrounds most avatars have.

Chris Garret’s and my own backgrounds blend more with our faces, but again the plain color  dominates the background. Why does it work? Simplicity. While most people’s avatars are overly busy and try to cram as much as they can in just so many pixels. That’s why avatars with a simple solid background stand out.

Nebojša Grbacic’s avatar has his face and a plain background. In the avatar, he’s wearing a black blindfold in sharp contrast to the color of the rest of the avatar. Why does it work? Unexpectedness. We expect a face, not a blindfolded geek smoking a cigaret. It’s hard not to notice him and even chuckle a little when you do.

Make it Your Own

Muhameed Saleem uses a simple spade symbol for his avatar, yet you always know it’s him. Why does it work? Uniqueness. While we see the spade symbol in casino pa natet every deck of cards, Muhameed is the one who made it his own in the social media space. It’s characteristic enough to stand out while at the same time simple enough not to seem cocky.

Patrick de Laive’s avatar uses space in an awesome way – by not using it. Why does it work? It breaks the rule that you have to actually put yourself, your brand or even your logo as the centerpiece of the avatar. The background is highlighted while drawing our eyes to a unexpected placement of Patrick’s face. Original and makes you wonder what else he can surprise us with.

CoTweet’s avatar is a good example for companies whose logos just don’t fit into a little square known as the avatar. Looking at it, it seems that they indeed just put their logo inside. However, they shortened the logo while still staying inline with their own brand design guidelines. Why does it work? Consistency. The logo is kept in the same style and sends the same message even when it’s been heavily modified.

If you don’t have a brand, don’t want to showcase it or your own likeness on your profile – there are other possibilites. One is to choose a sexy avatar. While sex sells on Twitter as well as anywhere else, don’t get too carried away. To the Twitterati blatantly pornographic photos with weird usernames will indeed look very spammy. Start following people like crazy and you’ll be known as a spammer for sure.

Your avatar on a social network is the simplest way of letting others recognize you for who you are and personalizing your experience. No matter if you’re a teenager or already have teenagers of your own, an avatar is something you have to create yourself. We don’t want any standard AOL avatars, now do we?

Our new Twitter Wall module connects you and your users through one of the top social channels. Use our simple setup to bring your Tweets, hashtags or searches into your ShoutEm app. More social engagement means more return for your app or brand, and this new feature makes sure your profile and trends are easy to

Having multiple social networks, such as Shout’Em, Twitter, Facebook and others, can be a hassle. For example, lets say you want to update your status across all of them. Well, with the free HelloTXT web service, you can! HelloTXT supports status updating to over 50 services, including Shout’Em. All the large networks such as Facebook