Wow, the week is finally over. I’ve been in NY and Silicon Valley with Seedcamp guys, and I would like to share my experience with people in my region and all European startups looking for opportunities on the global market. I cannot thank Reshma and Saul enough for all the things Seedcamp has done for us, so I will try to summarize my experience in this blog post, and hopefully it will inspire and motivate more startups from the region to apply to Mini Seedcamp Zagreb. I hope I will motivate those who already applied to perfect their pitches and prepare for a show time in Zagreb. 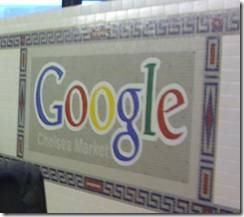 In the morning, we had a sort of Mini Seedcamp in NY at Google’s offices. All of us held short 3-minute pitches and after that we had 30-minute sessions with mentors. People were very friendly and full of advices. It is so much easier to explain in USA what you are doing and where the opportunity is. My favorite mentors were Dan Porter from OmgPop, Laurie Racine from Startl and John Stokes from Montreal startups.

After that we went to a BrownBagLunch event organized by Beta Works at the Apple HQ in New York. Basically, those meetings are held during the lunch and everyone is bringing their lunches and talk and listen to the pitches while eating.

And one of my favorite things this week was Special New York Tech Meetup event that night, where all Seedcamp companies on the US trip got a chance to demo online. For those who don’t know NY Tech Meetup, here is how it works. They have meetings once in a month where they choose a couple of startups to present a live demo of their product. No PowerPoint, no talks; only live demo’s are allowed. I messed up my pitch a lot because I didn’t have anybody to drive my presentation but the audience still got it. What is most impressive about NY Tech Meetup is that they have around 700 visitors at each meetup. It is like a rock concert, just amazing. Even in SF they have a smaller event with around 250-300 people participating. So in that point NY kicks ass. Imagine 700 geeks at one place. Awesome :-). Check out the Withneys Hess nice blog post about the event. 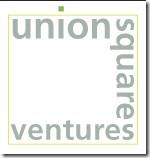 We began our day with a breakfast at Union Square Ventures with Brad, Albert and Andrew. They gave us a talk about NY vs. SF vs. Boston vs. Europe VC’s and overall startup scene. It seems that NY is getting more and more new startups and successful entrepreneurs and it is becoming one of major hubs in USA if you want to start a business. What was interesting to me is their statement that until some time ago it was very hard to hire a programmer in NY, because they all worked in a banks and had good salaries. However, now everything is being changed because banks are in troubles and people got tired of boring nine to five jobs. They were extremely friendly and open for questions. No wonder they are one of the most wanted investors in the USA :-). 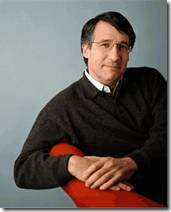 After that Saul Klein took us to his uncle Jonathan Klein’s company headquarters GettyImages. Jonathan Klein gave us a speech about how they started 15 years ago, how they stayed No.1 over all this years and how they still manage to keep 2000 employees in multi billion dollars company motivated to work hard. Besides that, he mentioned how they will be covering 15th Olympic games, explained technology behind it, etc. One really cool example, of how they do business is that they promised to press, that during Obama’s oath they will have pictures of him holding his right hand up, available to download before he finishes the oath. Quite impressive story, I have to admit :-).

Flight to SF was delayed so I arrived in my hotel around 2 AM, which is basically 5 AM NYC time. Fun…

In the morning, we again had pitches and mentoring sessions in a form of Mini Seedcamp at Google’s offices. However, this time mentors were really high profile people from the valley. I will just mention my favorite ones and those I’ve been talking to. Pascal Finette from Mozilla angel investor Aka-Aki, Andrea Zurek Xg Ventures (Ex Google), Mark Jacobsen Alphatech Ventures, lately investor in FourSquare, Group.ly… Don Dodge who was our host wrote a nice blog post about whole event and covered all the teams.

Later that day we went to Startup2startup event organized by Dave McClure. There was like 150 people from around 50 startups. It is informal dinner with tables organized so that everyone has one and people discuss around one topic. This time email was on the menu. Future of email in general, problems about dealing with it, sending it, spam, etc.… Again, so many startup companies at on
e place and all that energy is just amazing. And it is just one of the events that is going around the Valley… 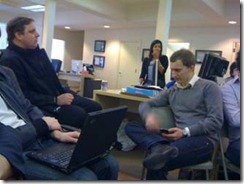 We started with a breakfast with Mike Arrington and Jason Kincaid. First we had short introductions and brief from Mike on how to approach press and why not use PR companies :-). After that we had 3min pitches to Mike and Jason who were recording a videos of us pitching. I had an impression that they really liked our stuff. Besides that, whole TC crew has been very friendly, letting us use their office and talked to us a lot

while we were there. We all know that sometimes their blog posts can be nasty but I have to say that these guys are very cool and very nice when you meet them in person.

At the afternoon we had another Mini Seedcamp in SF at the First Round Capital HQ with a new group of mentors and again we received a lot of feedback and good ideas. Highlight of the evening was chatting with Todd Sampson who is a really nice guy and had some really interesting ideas on how to approach sport fans and what could get them hooked on one of the ShoutEm networks.

I finished the day at the Live Sushi where I turned on roaming just to check in with Yelp (yes Yelp is my choice for location based networks :-)) in a front of the Platogo guys Jacob and Florian who just could not believe that I’m doing it :-). Most of my time I spent with them, and they were great buddies to hang out with. Real geeks with a nice idea to put all your flash games to a Facebook in no time :-).

I’m flying back to NY where I’m going to meet my wife who is coming from Croatia. We’ll have a nice relaxed weekend. And btw I have managed to set up a new Croatian record in Tweeting from a plane. I tweeted three times and thrilled up all my Croatian followers with this unbelievable achievement. Yes, Delta has WiFi on board :-).

One more time. Go and apply for the Mini Seedcamp Zagreb. Don’t miss your chance to see the Valley from inside.

Only one week before the Mini Seedcamp Zagreb, 20 startups who will compete for a chance to participate in a Seedcamp London have been announced. Here is the list: AdCaptcher, Bucharest, Romania Albia, Sarajevo, Bosnia and Herzegovina Clover Studio, Zagreb, Croatia CO2cut, Zagreb, Croatia Digital Distribution Press , Bucharest, Romania Flowr, Ptuj, Slovenia GaMiTech ,

Mini SeedCamp Zagreb was held on February 11th, and few days later we can proudly say: it was a huge success! 20 teams, 60+ mentors, great atmosphere, lot’s of technology… #epicwin! After whole day filled with presentations and mentoring sessions, 5 teams emerged as winners of the Mini SeedCamp Zagreb. They are (in alphabetical order: