It’s hard to argue with the fact that the music industry has been severely impacted by the Internet. But that’s not always a bad thing. The smart bands and labels are finding innovative ways to reach and grow their audiences—and mobile apps are one of those ways.

Take the app for Jukebox the Ghost, created by their label Yep Roc and designed to reflect the look and feel of the band’s newest album. The app pulls in exactly what’s most important to fans—songs, tour dates, and videos. It’s a one-stop-shop for any dedicated fans who wants great content on the go.

We spoke with Yep Roc to find out a little more about how mobile apps work for their bands:

What’s the biggest advantage in having a dedicated mobile app for a band?
We’ve found that dedicated fans like having everything in one place, where they can access a band’s videos, tour dates, news and songs all at once. It also is a great place to reward fans with exclusive content delivered only through the app. And with mobile being as huge as it is for our artists’ fans, it’s great to deliver this content to a device that’s constantly with them.

What was your primary goal in creating this app for Jukebox the Ghost (and others)?
We wanted to make it easier for fans to access the huge amount of content Jukebox the Ghost is producing, from the album and its songs to official videos, bonus tracks and behind-the-scenes photos. Putting all of this in one place makes it easier for fans to stay connected to the band. The YouTube RSS feed is a great solution for the band’s channel, and we’ve seen a large increase in mobile views since launching.

What does your audience get out of it that they can’t get through other social media channels?
We’re posting exclusive content to the app that fans can’t get anywhere else—we launched with a track stream, and have plans for additional content such as acoustic versions of songs and messages from the band.

What’s next for the app or for band-specific apps in general?
We’d love to offer direct downloads of songs from the app, and are very excited about the geo-targeted push notifications around tour dates.

Download Jukebox the Ghost for Android or iOS today using the links below. 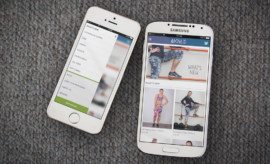